Her 15-year-old daughter was lying on the blood-covered bathroom floor after giving birth a few minutes earlier. Dhillon hadn’t even known she was pregnant.

The weak and dazed daughter was taken to another room while Dhillon was left alone with her newborn grandson. She began to wonder what others in Bakersfield’s sizable Sikh community would say about her daughter’s pregnancy and what possible shame it would mean to the family.

It was in those moments that Dhillon chose a terrible course of action, prosecutors said. She took her grandson, laid him face down in the bathtub a few inches of water, and watched him drown. Then she buried him in the back yard of her home in southwest Bakersfield.

On Friday, 45-year-old Dhillon was sentenced to 25 years and four years in prison. She sat with her head bowed for most of the hearing in brown prison clothes and wore a yellow headgear and black mask to prevent the spread of the coronavirus.

A jury convicted Dhillon in December of first degree murder and two crimes, one filed in connection with the baby’s death on November 12, 2018, and the other for failing to provide medical care to her teenage daughter after birth.

Before sentencing, Dhillon’s daughter and teenage son went to court. Both said they love their mother and have kept in touch with her since they were arrested. The daughter said the family needed her.

Defense attorney David A. Torres speaks to the media following the conviction of his client Beant Dhillon after her murder conviction for the death of her newborn grandson.

Defense attorney David A. Torres urged Judge Kenneth C. Twisselman II to consider sentencing Dhillon to parole, stating that her position was under state law an “unusual case” where the judiciary is best would be served with a suspended sentence.

Torres said Dhillon was also a victim who was abused for years by her husband who terrorized the whole family. He said he had difficulty understanding the jury’s verdict given the cruelty Dhillon endured.

“He was the Joseph Stalin of that particular family,” Torres said of the husband. The case was a tragedy for both Dhillon and her children, he said.

Twisselman noted that Dhillon had no criminal record at the time of her arrest and committed the crime under duress. He also noted that she had been diagnosed with post-traumatic stress disorder. 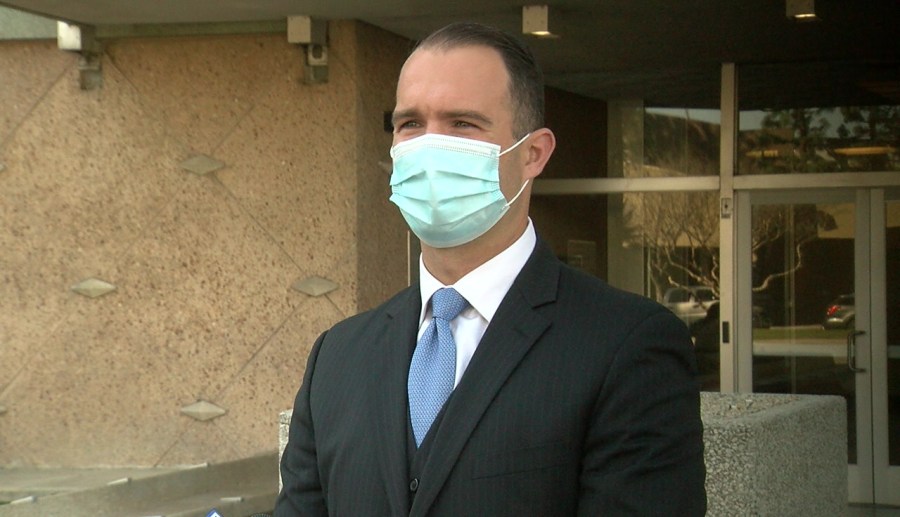 Prosecutor John Allen speaks to the media after Beant Dhillon was convicted.

But that didn’t excuse “the cruel way she treated her grandson in his time of greatest need,” Twisselman said. He found the case not unusual and imposed life imprisonment.

At the trial, Torres argued that the baby died shortly after birth as a result of prenatal care or blood loss because the baby’s umbilical cord was not tied off after it was cut.

Torres also suggested that the baby’s father, an adult cousin of the daughter, may have played a role in the child’s death.

Prosecutors pointed to Dhillon’s confession, which she later retracted in the trial, and the numerous lies she made to investigators as evidence of her guilt. In an interview for the jury, she told investigators that she drowned the baby because the pregnancy would put the family to shame.

The beliefs and practices of the Sikh community were at the center of the process. Cultural experts explained how many families in India’s Punjab region – where Dhillon was born – are extremely conservative. Out of wedlock pregnancy is viewed as shameful by some in the community, experts called on by the defense testified. Many traditional couples, like Dhillon and her late husband, are brought together through arranged marriages, and an unmarried pregnancy could ruin a woman’s chances of landing a good match.

Some experts also testified that men have more status than women in Sikh society, and women are expected to obey their husbands and fathers.

While prosecutor John Allen recognized that some in the Sikh community consider an unmarried pregnancy to be shameful, he said in court that it certainly does not allow the murder of an illegitimate child. He said Sikh culture promotes peace and Dhillon’s actions are not representative of the community’s mindset.

Allen said Dhillon told several lies, including about what happened to the baby in her first statements to police, that her husband made her unable to make her own decisions, and how cultural tradition required her to remain silent and allowing men in the family to decide what to do.

Dhillon and Bakhshinderpal Singh Mann, the baby’s father, buried the child together at the family home on Shining Crag Avenue, investigators found. Her husband, Jagsir Singh, 47, was called home from work and participated in the cover-up.

The daughter, who passed out and did not know what had happened, was later told that her son had been put up for adoption.

It wasn’t until months later, after an argument with her father in which he threatened to kill her and indicated that the baby was buried in the backyard, that the daughter spoke to school counselors, who then reportedly called the police.

Police discovered the baby’s body and arrested Dhillon and Singh. After Singh was bailed for murder, he hanged himself at home.

The man who lived with the family and had had a sexual relationship with the daughter since she was 14 and in her early twenties was outside the county when investigators unearthed the body. Before she was arrested, Dhillon gave him a hint that the police had arrived at her home, prosecutors said.

Man was not found.

The daughter testified that only she and her husband knew about the pregnancy. She said she kept it a secret because her parents were angry.

During the trial, Dhillon testified that she admitted killing the newborn, but said it was a lie to protect Singh and Mann, who were both illegally in the country. She said she was afraid of what would happen to them if they were charged with a crime.

She testified that she never harmed the baby.

Allen, the prosecutor, said at the trial that this was just one lie among many that Dhillon told.

Final Phrase: The Bakersfield meals scene continues to impress with a mixture of native traditions and fashionable twists of Bakersfield life